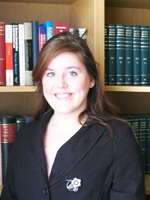 Her research fields are the prohibition of use of force, non-intervention, the Security Council, the application of international law in domestic law, particularly in connection with the publication of the resolutions of the Security Council. Maritime law, more exactly maritime piracy and the situation of Somalia also belong to her research interests with a view on the problem of "failed states" as a marginal area between law and political sciences.

Between 2008 and 2010, she was an active organizing member of ELSA (European Law Students' Association) Szeged. Currently, she is the member of the United Nations Association of Hungary (UNA).