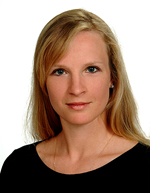 She received an M.A. in English in 2000 at Károli Gáspár University of the Reformed Church in Hungary, and in 2001 also obtained a degree at the Faculty of Law and Political Sciences, Pázmány Péter Catholic University. Having finished her university studies, she started working at the Ministry of Justice, Department of European Law, as a legal and linguistic expert, then she worked in Brussels between January 1, 2003 and May 31, 2009. First, she was a lobbyist, then a policy adviser to the EPP-ED Hungarian Delegation. In 2010, she received a Master of Public Administration and Public Policy at Harvard University, Kennedy School of Government. In 2010/11 during the Hungarian presidency of the Council of the EU she worked as a budget attaché at the Hungarian Permanent Representation to the EU. From the Fall of 2012 she is a PhD student at the University of Vienna, Faculty of Law. Her field of research is the Just War Theory and the challenges after the Pax Americana in the 21st century.

She has two children and likes spending her free time writing and doing a lot of sport.