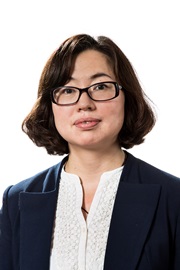 She was born in Jilin Province, China in 1977. She has studied Chinese as a Foreign Language at Shenyang Normal University from 1996 to 2000. She took the Master's Program in Linguistics and Applied Linguistics (foreign language) at Shenyang Normal University between 2007 and 2009. Since 2010, she is a Ph.D. student of the Program in Sinology at Eötvös Loránd University (ELTE), Budapest, Hungary.

Between 2000 and 2010 she taught Chinese at different institutions in the city of Shenyang. In 2007–2008 she worked as a Chinese language teacher at a high school in Ansan, South Korea. From 2010 to 2012, she taught Chinese as the native language teacher of the Department of Chinese Studies of ELTE. From 2012 to 2014 she worked at the Institute of International Education of Shenyang Polytechnic University. Since 2014, she is a full-time Chinese language teacher at the Department of Chinese Studies of Pázmány Péter Catholic University, Hungary. Her main research area is teaching Chinese as a foreign language.