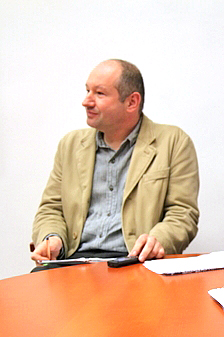 What is your area of research? How long have you been working in this field? How long have you been lecturing at PPCU?
My main area of specialization is early modern philosophy, the history of ideas in the early Enlightenment, a historical period which has never ceased to fascinate me since my undergraduate studies because of the profound impact it has had on our present life. I believe that a large part of our present troubles – most of the cultural, economic and environmental problems we have to face in the 21th century – have their roots in the early modern period, therefore, our understanding of the past may suggest some ideas as to how to deal with our current concerns. I have taught the history of early modern philosophy since the beginning of my university position in the early 2000s.

When you were a university student yourself, did you ever study abroad? If you did, what courses did you take?
As a master’s student in classical philology, I spent a semester in Amsterdam in the late 1990s. A few years later, I  won a ten-month scholarship in Rotterdam where I had an excellent opportunity to work on my doctoral thesis. I also spent three months in Leuven as a guest of the Collegium Hungaricum run by the Jesuit order.

How did you choose the country and the university, and how much information did you have about the courses and the lecturers before your visit?
My first choice was a matter of coincidence. When I was completing my classical studies at the Latin Department, a TEMPUS scholarship in Amsterdam was offered to senior students, so I applied and got the scholarship. Although at first my knowledge of the country was very limited, I was so delighted with the infrastructure and the lifestyle in the Netherlands that later I pursued the opportunity to return.

Have you been a guest lecturer at any universities abroad? Do you have work experience with teachers/instructors at foreign universities?
Yes, later in my carrier, I took advantage of my professional relationships  in Leuven where I was a short term ERASMUS visiting professor. Later, thanks to the intensive cooperation between French and Hungarian early modern scholars, I taught (also as an ERASMUS visiting professor) at Université Paris 1 Panthéon-Sorbonne in 2015.

Your lectures here, at PPCU, are very popular with foreign students. To what reasons do you attribute this?
For foreign students, I generally offer introductory courses in philosophy of mind. If these lectures are well received, the merit is all to be attributed, I believe, to the interesting subject. The problem of mind, an interdisciplinary issue, lies at the heart of many of our most pressing problems. In light of the technological development, the rapid progress in artificial intelligence research and cognitive psychology, the question of how we, human beings, fit into the image given by the natural sciences is surfacing in more and more areas.

How easy is it to find the way to your guest students, to reach them and to get on with them?
My general impression is that guest students are very motivated and open-minded, and they do very well in the exams. The reason is, I suppose, that going abroad to study at another university, to immerse yourself in another culture requires a certain degree of openness.

What do you like about teaching foreign students?
I even find the situation, meeting people from all around the world, very inspiring. In addition, foreign students often bring up interesting points which may or may not depend on their cultural background (a choice which cannot be easily made  without false generalizations), but in any case, they often pose a challenge to my approach and galvanize the discussions.

Could you mention any differences between Hungarian and foreign students in terms of their needs or expectations?
No, not really.

Last but not least, when you have spare time, how do you usually spend it?
I like reading, hiking, going to the theater, visiting museums and exhibitions, and in doing so I spend most of my spare time with my family.