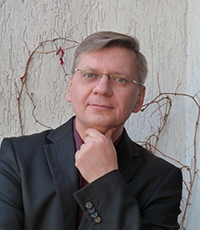 What is your area of research? How long have you been working in this field? How long have you been lecturing at PPCU?
I have two subjects of interest. Firstly, the history of Central Europe after 1945, that means communism period and period of independence and democracy after 1989. The reason is that I had the opportunity to actively live the mentioned period after 1989. The second subject of my interest is countries’ soft power, it means non-military, non-economic power of the country.

When you were a university student yourself, did you ever study abroad? If you did, what courses did you take?
In my case the first university abroad where I was studying was ELTE. It happened thanks to the help of prof. Wacław Felczak, legendary messenger/courier during World War II. After that I contacted universities like Stanford, Charkow or Brno. I cooperate with PPCU as well for more than 15 years and I work here for 5 years.

How easy is it to find the way to your guest students, to reach them and to get on with them?
One group of my students are Catholics from Western European countries, mostly from France and Italy who are rediscovering or redefining their Catholicism because of increasing Islamic culture power in their countries. Second group is simply interested in Central Europe. Usually they are not even able to explain why they made the decision to undertake studies in Hungary, they only know that to really get to know the history of Central Europe the best is to start studies and to live here for a while, in countries like Poland, the Czech Republic or Hungary.

Can you contribute to broadening your foreign students' horizon about Hungary and Hungarian culture?
Yes of course. Because Hungary became my second homeland after Poland and I made this decision fully intentionally and rationally, I would like to risk the statement that I am able to list ad hoc more arguments why it is worth to get to know Hungarians and their culture as an average Hungarian does.

Could you mention any differences between Hungarian and foreign students in terms of their needs or expectations?
No, I don't see any. All students and young people in general are connected by a) a desire to overthrow and undermine existing opinions b) if the a) is not possible, they desire to understand the topic or topics we discuss during classes. This is not always possible :) Central Europe, on which I’m focused, is a territory of the biggest quantity of languages, national cultures and different problems per square kilometre of our planet.

How can you introduce your foreign students to our university, its past and its spirit?
This is rather an easy task. Even thanks to 1) personality and significance of Peter Pazmany 2) the role which Central European universities and their graduates played in the history of their own countries and in the world 3) the role which Church and Catholic Faith played in the clash with the most oppressive regimes of the 20th century: fascism and communism.

Do you ever give your Hungarian students advice on where to spend their Erasmus scholarship? What aspects do you take into consideration when you do so?
Yes, first of all, by encouraging them to travel abroad in general. Universities are sending their students abroad and accepting foreign students since the Middle Ages. It is not possible to learn everything from books or the Internet.  Traveling is the best form of education as the Polish proverb says. I do recommend to learn history like the only subject, which on the base knowledge about the past gives rational basis to discover the future.

Last but not least, when you have spare time, how do you usually spend it?
I am climbing Pilis mountains and still discovering new tastes of gulyás and halászlé prepared in Hungary in thousands ways, as we know. I encourage students to do both, of course.